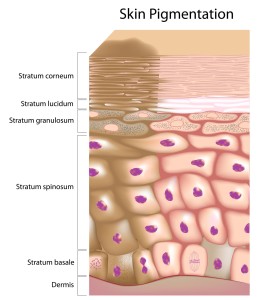 Your skin’s color comes from a pigment known as melanin. There are special cells in the skin that make melanin. However if these cells become unhealthy or damaged in some way, it can affect the production of melanin. As a result the skin can become a different shade or color entirely. Some pigmentation disorders affect just localized patches of skin.

The melanin is what determines the color of the skin and also helps to protect your skin from the sun.

The pigmentation damage or disorders that can lead to pigmentation (or changes in the color of the skin) can be brought about by an inflammatory problem or infection.

Mottled looking skin can be the result of changes to the blood vessels under the skin.

Pigmentation Disorders can be because of hereditary or genetic reasons, or caused by an injury, or simply due to changes in a person’s hormone levels.

Skin Pigmentation or Vitiligo is a skin condition that causes patches of skin to become discolored. It is caused by a loss of pigment in the skin, resulting in irregular patches of skin that are lighter in color than the surrounding skin. It is estimated that 1–2% of the world’s population suffers from vitiligo.

Vitiligo is a condition in which the skin loses its pigment, resulting in irregular patches of skin that are lighter in color than the surrounding skin. The condition is caused by the destruction of cells in the body that produce melanin, the pigment that gives skin its color. Vitiligo can affect any part of the body, including the face, hands, feet, arms, and legs. It is more visible on people with darker skin tones.

Who can suffer from Vitiligo?

Vitiligo can occur in any age group and in both genders. It is also seen more commonly in people of African, Asian, and Hispanic descent. Vitiligo is not contagious and is not related to any other skin condition.

Why does Vitiligo happen?

The exact cause of vitiligo is not known but researchers believe it is caused by an autoimmune disorder in which the body’s immune system mistakenly targets and destroys the cells that produce melanin. Other possible causes for vitiligo include genetic factors, stress, and exposure to certain chemicals and toxins.

What treatments are available for Vitiligo?

While there is currently no cure for vitiligo, there are treatments that can help improve the appearance of the skin. Topical corticosteroids are often prescribed to reduce inflammation and help the skin to produce melanin. There are also light therapy options such as narrowband ultraviolet B (UVB) and excimer laser, which expose the skin to ultraviolet light to help re–pigment the affected area. Other treatments include skin grafts, tattooing, and micropigmentation.

In conclusion, vitiligo is a skin condition that affects 1–2% of the world’s population. It is caused by a loss of pigment in the skin, resulting in irregular patches of skin that are lighter in color than the surrounding skin. There is no cure for vitiligo but there are treatments available to help improve the appearance of the skin.